All materials on this site Copyright Tiki King, 2011. All rights reserved. The Ukalope (aka ukealope, uke-a-lope) is a trademark of Tiki King, and may not be used without permission.
Home 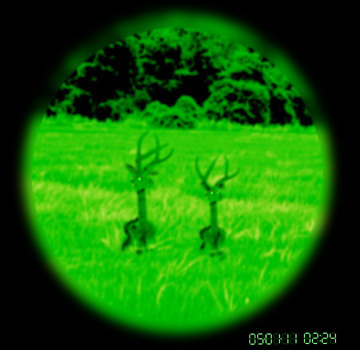 The Mysterious Ukalope!
(Uke-a-lope)
Species: Ukus Lepus Antilocapridae
What is is? Where did it come from?
The Santa Cruz Mountains are home to many unique and unusual animals; The Santa Cruz kangaroo rat (Dipodomys venustus) The California Giant Salamander (Dicamptodon ensatus), The Banana Slug (Ariolimax columbianus), The Mount Hermon June Beetle (Polyphylla barbata), The Jury Room's Giant Gopher, and many others. According to local experts, even Bigfoot has been sighted here in the cool redwood forests. But one that often evades detection, is the Ukalope.

Santa Cruz has been called "The Ukulele Capital of the World", with the beach boardwalk and it's surfing history, the Ukulele has been a part of Santa Cruz since the early 20th century. With so many players and resulting Ukulele collections, it was only a matter of time before some of these Ukuleles, perhaps wandering away from their homes or even abandoned, began mingling with the local Fauna. The result, as you will see here, is the ukalope.

Although there are some photographs of this beast in the wild, there are no living examples in captivity. Historically, most specimens found were too infested with fleas to be saved. Research into this noble beast's origins has been vague at best, but once on the trail, I uncovered a few clues that it has been around for a while. This newspaper clipping found in a Felton old-timers scrapbook tells of an animal that may well be the Ukalope. 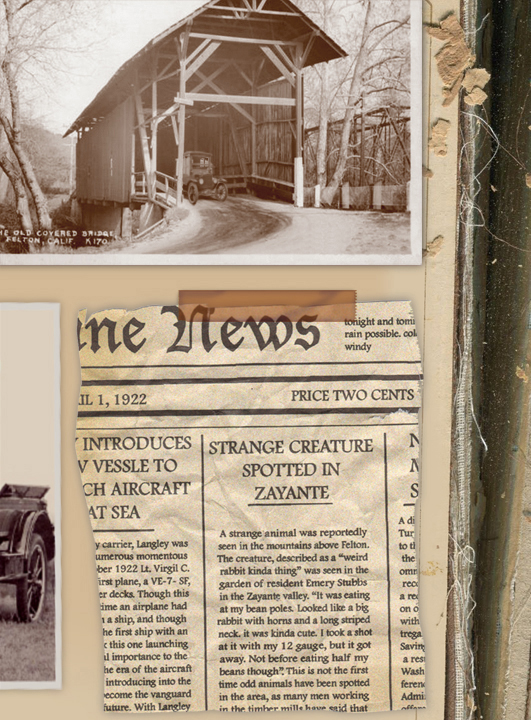 This old postcard shows an iconic Santa Cruz Beach scene. Most tourists sending home this view of the Wharf and sun bathers would probably never notice that there was something unusual on the left near the edge. 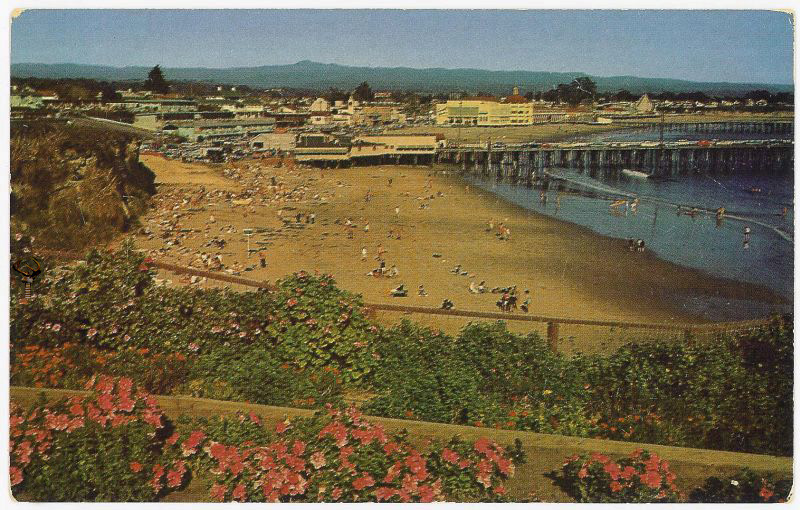 Here is that image enlarged and enhanced. It is possible that it is the more common Western Jackalope, but the length of the neck and striped markings suggest something different. Could this be the antlers, head and neck of a young Ukalope? 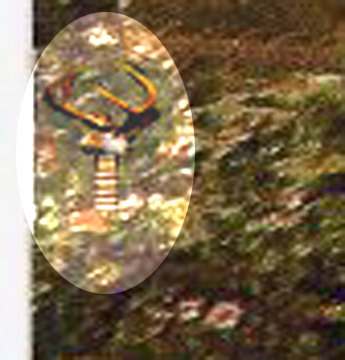 Not long after I started my research, This showed up in my mailbox.
Dated from the 1970's and signed only "P." Could it be a hoax?
Or does this sketch portray perhaps the grandparent or even Great grandparent of our Ukalope? 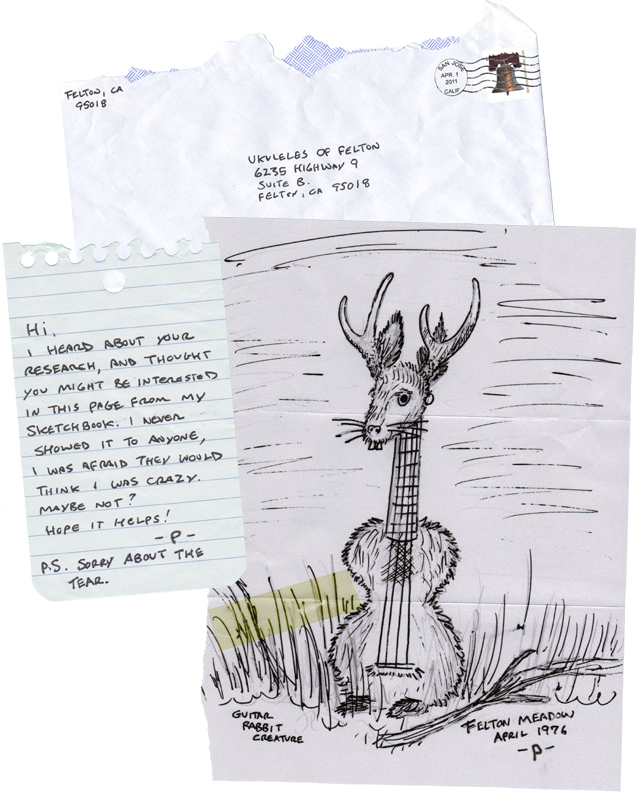 Next, these snap shots dated 1980 show something by the side of the road near the post office that can only be a Ukalope 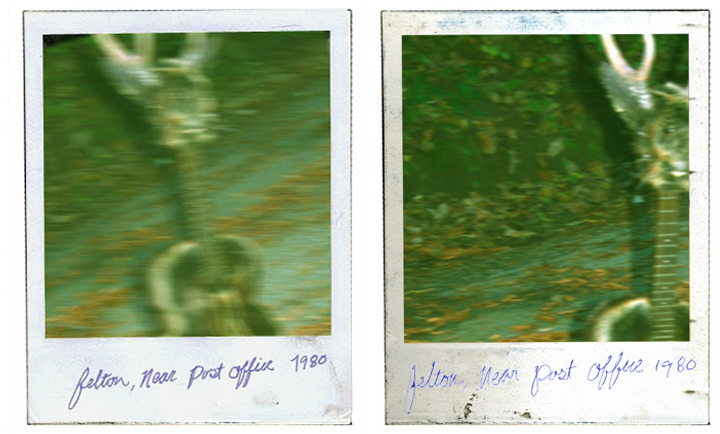 These next photos were sent in by a local wildlife conservationist.

"This first was taken by a night vision game camera. I set it up in a nearby field
in hopes of photographing a mountain lion which had been spotted in the area,
but instead snapped this intriguing photo, which seems to show two adult Ukalopes
feeding in the tall grass."

"I returned to the area to investigate the nearby woods, and was lucky enough to take this photograph. Because of it's natural camouflage, I almost missed it. The creature bolted as soon as I took the photo, and I was unable to take another. " 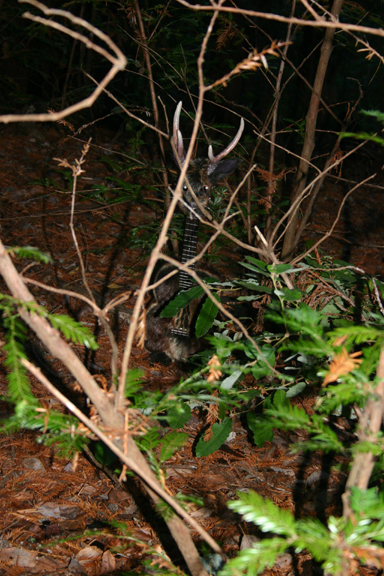 "I was able to track it some distance, and although I never saw it again, I did come upon this den under a stump. I am fairly certain this is the nest of a Ukalope." 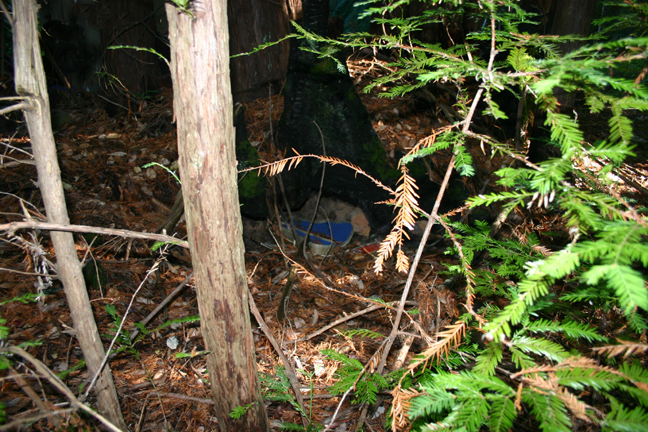 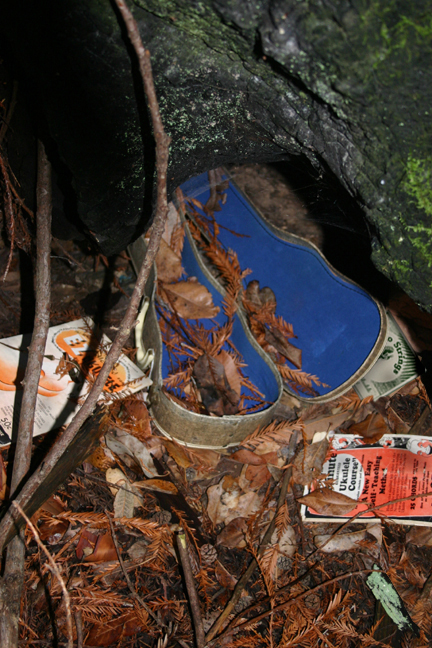 "I set up a motion activated infrared camera facing the den, and captured these two images,
showing what I believe to be a very young Ukalope, judging by the single prong horns, and spots on the chest, probably a yearling" 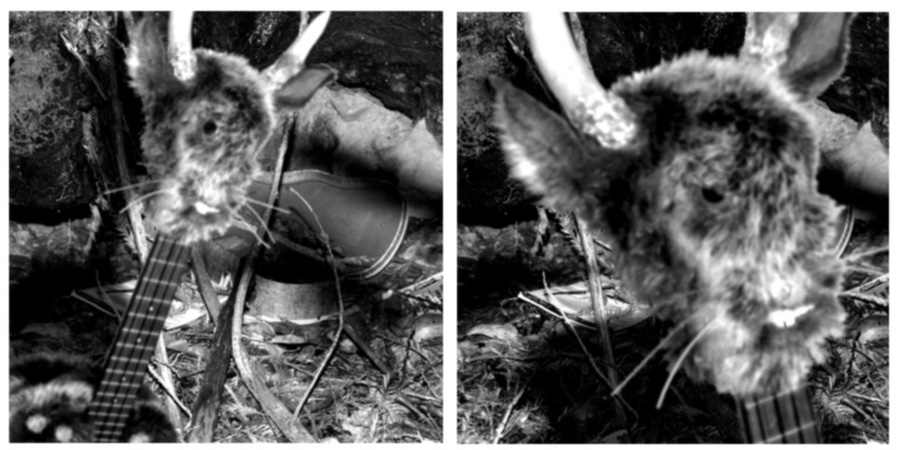 "I collected some Hair/ fur samples and sent them to a friend of mine in San Francisco who knows some people at the forensics Lab. They sent me this report, which was inconclusive"." 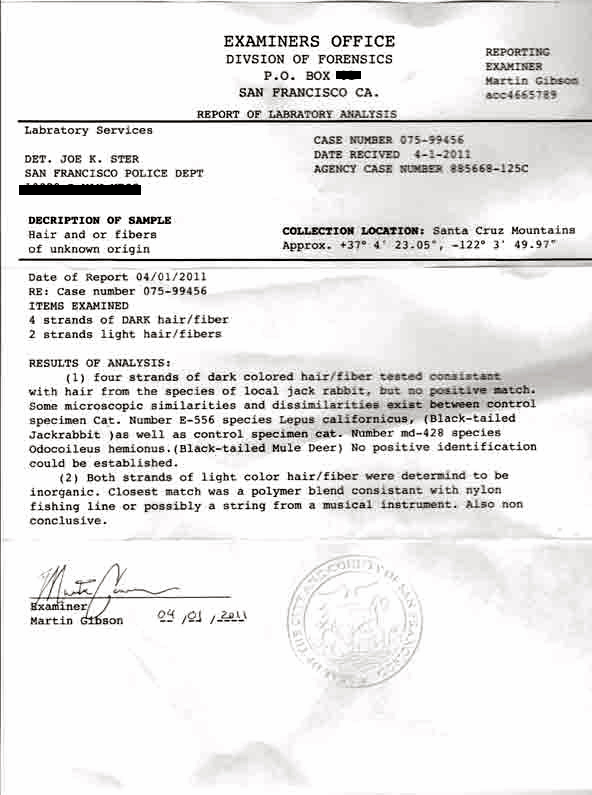 
This next photo goes back over 30 years. It's contributor, Mr. B says:

"When I saw your webpage, it reminded me of this photo of my father, taken in the
late 1970's at Santa's Village, a Christmas theme park that used to be in Scotts Valley.
I remember seeing these things, but thought they were just weird puppets, it was a theme
park, after all, so you know, I figured it was some fantasy thing.
You can see it there in the background by the pumpkin mans elbow....."

We will let you be the judge, but it certainly looks like a Ukalope to us 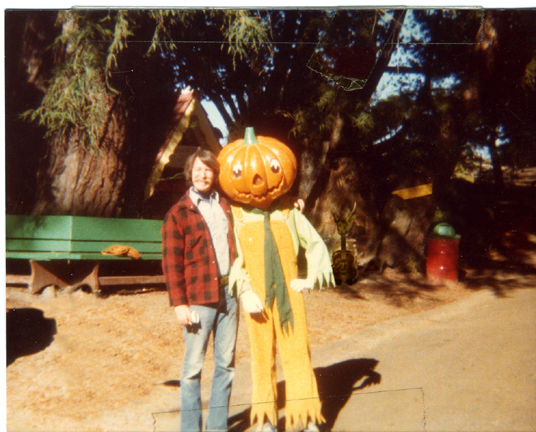 To the best of our knowledge, the Ukalope has never been spotted outside of the western
United States, but it seems that the Japanese are already trying to get in on the Ukalope Action.
This jacket, photographed in Osaka, Japan, would seem to show just that.
The japanese characters (roughly) translate to: "Ukulele Rabbit"" 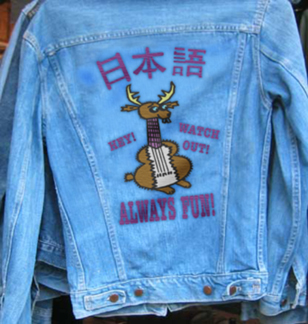 This next picture originaly came from the Felton historical society. They brought it to me because of the Ukulele players. 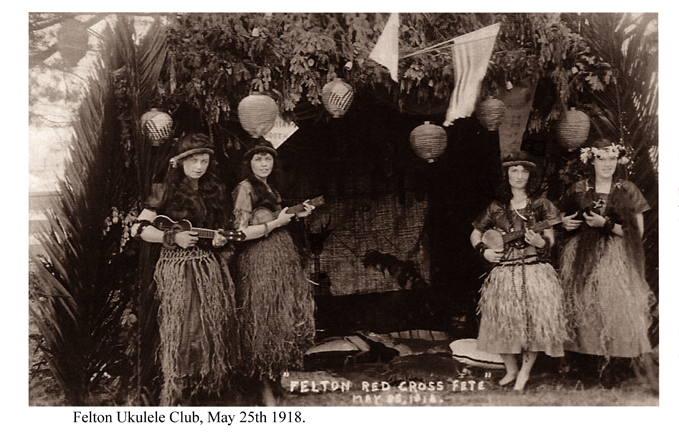 As I was getting it ready to frame, I noticed something on the screen behind the lady on the left that looks like something casting a shadow... 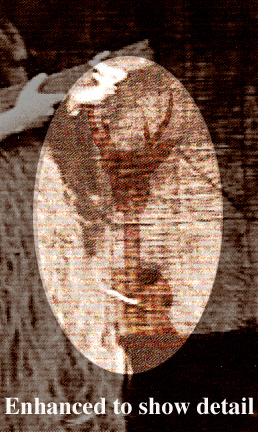 Could this possibly be the shadow of one of the First Ukalopes? it would be extremely early, but unless this photo has been doctored, I think it is...


This next clipping comes from a Ukulele shop regular, who was going through some old 1930's and 1940's newspaper Comic strips, and provided us with this gem. 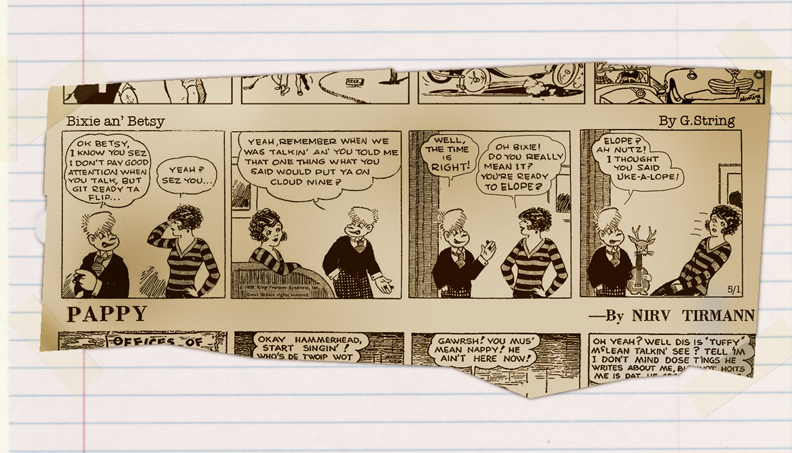 They spell Ukalope wrong, (Uke-A-Lope) But, it looks like one to me...

I recived this electronic sighting from Rose L, of Eugene Oregon...

" I saw a Ukalope in the backyard of my apartment complex. It was majestic and lovely, like a creature from my most wonderful of dreams. I dont have photo evidence but here's a drawing of how it went down" 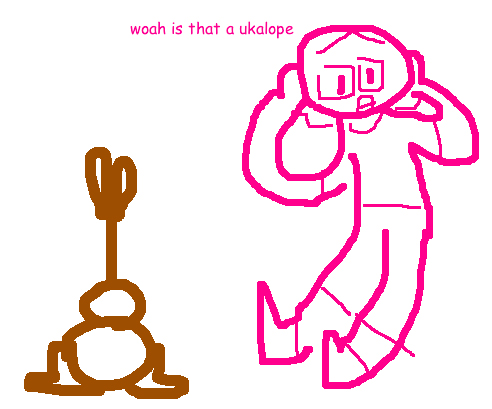